But, such is the excitement Dane Scarlett is creating, he could not help himself.

‘I don’t want to speak too much because tomorrow I arrive in the building and the kid’s boss is going to kill me!’ Mourinho said after Scarlett’s cameo in Tottenham‘s Europa League win over Wolfsberger on Wednesday.

Next season he has to be a first-team player. Immense talent. Very good physical development.

‘I hope that nothing is going to destroy that potential. He must have feet on the ground and head on his shoulders because he has a fantastic talent.’

Speaking to BT Sport, the Portuguese’s sentiment was much the same. ‘He is a diamond, a kid with incredible potential. He has worked many times with the first team and that gives him a different personality.’

Spurs believe they have two special 16-year-olds coming through their ranks in midfielder Alfie Devine and striker Dane Scarlett.

Their first appearances under Mourinho made both Spurs’s youngest ever player – Devine replacing Scarlett, who made his debut first in November, as the record holder. 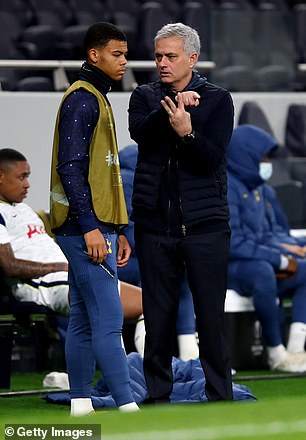 Devine is also Spurs’s youngest ever scorer after netting in their FA Cup tie against Marine in January.

It was Scarlett’s turn to make history again on Wednesday, his assist for Carlos Vinicius making him the first 16-year-old since a certain Kylian Mbappe to set up a Europa League goal.

There was also a comparison to Marcus Rashford from Mourinho.

Being mentioned in such company might be a lot for many young footballers to get their heads around, especially one so young he has only recently left school and, effectively, just starting out on what he hopes will be a long and successful career.

But there is a well-placed confidence that Scarlett can cope. Scarlett comes from a grounded family, a big influence in him not being one for getting carried away.

The growing interest is expected to be something the youngster will simply take in his stride, with Spurs also doing their bit to ensure all of their young players remain level-headed.

Being involved in the first team at his age is considered a bonus by the currently overachieving Scarlett and he accepts that, despite his fast-tracking and Mourinho’s high praise, he could easily be returning back to Spurs’s Under 18s or U23s for a period.

When he scored five in the FA Youth Cup against Newport in January, Scarlett was more concerned about the three chances he missed before his goal glut began.

Scarlett, one of 10 academy prospects Mourinho has used at Spurs, has 20 goals and four assists in 16 games at U18 and 23 levels this season.

‘He’s got a real desire on the pitch,’ one source said. ‘He knows how to look after himself and is hungry

Send this to a friend